The Lehman Trilogy: a Homeric epic

Many small businesses started by Jewish refugees in the nineteenth century were to prove highly successful, among them our own Marks and Spencer. But the one-room general store which Henry Lehman opened in Alabama in 1844 was in a league of its own. Over the next 140 years it grew into the fourth largest investment bank in the U.S., and its photogenic failure in 2008 triggered a worldwide financial crisis. Stefano Massini’s original five-hour dramatisation of these events, staged in 2015 at Milan’s Piccolo Teatro, had a cast of twenty-eight. Ben Power’s adaptation at the National Theatre, beautifully directed by Sam Mendes, does the job in three-and-a-half hours, using only three actors.

But what actors they are. Simon Russell Beale, Ben Miles and Adam Godley play the eponymous Lehman brothers, and also their sons, grandsons, wives, mistresses, friends, enemies and multitudinous associates. It takes genius to metamorphose into a seventeen-year-old girl with no change in your costume, just a tilt of the head and the flutter of an eyelash. Adam Godley (aged 54) can do this; in fact, he can turn himself into all eight potential wives of a Lehman heir, one after the other, in two minutes flat. Beale and Miles are equally versatile, impersonating everyone from lolling babies to bent-back old men. All three are on stage for the whole of the play. All three are superb. 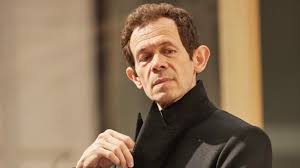 In a radio interview about the Trilogy (https://www.bbc.co.uk/sounds/play/b0b9v6zd), Simon Russell Beale said hesitantly, ‘It may be deeply pretentious to compare it to Homer, but …’. Please don’t apologise, I wanted to interject, you’re absolutely spot-on. In classical Greece Homer’s epic poems were regularly recited in front of huge audiences by performers known as rhapsodes, often accompanied by a flute- or a lyre-player: these events were nothing if not theatrical. In the Trilogy, the rhythm of the words is similarly underscored by live music, provided in this case by pianist and composer Candida Caldicot. And like Homer’s Iliad and Odyssey the play uses repetitions – both verbal and visual – to emphasise the beats of the story. For example, successive business developments are highlighted when one of the brothers writes the company’s new name in marker-pen on the glass wall of the set. ‘H. Lehman and Bro.’… ‘Lehman Brothers’ … ‘Lehman Brothers Holdings Inc.’

The Trilogy is a true epic, weaving small-scale individual portraits into a vast fabric illustrating the history of the U.S. and its immigrant communities as they are swept along on a tidal wave of capitalism. We watch as the Lehmans turn themselves from shopkeepers into ‘middlemen’, buying cotton from slave-owning growers and selling it on to manufacturers. They then become traders, bankers, asset managers, and finally a large-scale hedge fund. 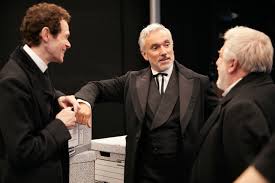 In outline, this isn’t unlike the more surreal tale told by Britten and Auden in their operetta Paul Bunyan, performed in the same summer by ENO: in that piece we see modern America emerging from forests hacked down by Swedish lumberjacks. The two productions were linked by the velvety purr which Simon Russell Beale emits when he’s doing an American – in Bunyan as offstage narrator.

Narration is the operative word here- and this, I think, is where the main point of comparison with Homer lies. Dialogue occupies only about one-third of the Trilogy; the rest is narrative, spoken by the actors. It’s as though the brothers have reappeared in their company’s abandoned headquarters to recount its history, and represent a few of the characters. In recent years a similar theatrical form has been used by playwrights such as Marina Carr and Tarell Alvin McCraney. It combines drama with story-telling, just like Homer’s poems. ‘Picture this in your mind’s eye,’ the narrator seems to be saying, ‘And now! we bring you a flavour of how it may have looked and sounded in real life.’ As actor Ben Miles observed in the same radio interview, ‘It’s like a song, a stage poem, a bardic oral history.’

Es Devlin’s design, which crams a panoply of events into a single minimalist office, is one of the stars of this show. Cardboard-boxes, combined in ingenious ways, make up nearly all the props. My only reservation about the production as a whole is that the end of the story is taken at too fast a pace and isn’t entirely clear. The image of Lehman employees being expelled onto the street carrying boxes of their possessions is familiar to many; but any twenty-year-old in the audience – a child of ten when it happened – might have been puzzled. Other dramas, it’s true, have sought to explain the crash; all that was needed here was some quick-fire narrative, headlining the company’s demise.

Cardboard-boxes are fast becoming the political signifier of our times. People sleep in them. Only the other week the Brexit deal was delivered in one. This pathetic symbol brilliantly encapsulates our world’s tumbling fortunes in the last, hectic decade. The Lehman Trilogy may well become one of the classic representations of this turbulent era.

The National Theatre’s The Lehman Trilogy, which premiered in 2018, transferred in 2019 to New York and then to the Piccadilly Theatre, London.